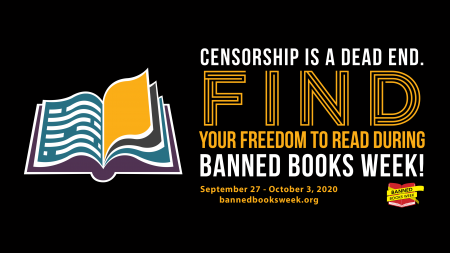 Each reading suited the given text.  For example the reading from Raina Telgemeier’s graphic novel Drama focused on the illustrations.  Since a graphic novel would have been challenging to convey in an in-person event, the crew used the Zoom format to advantage.  Likewise the ACRL Framework mentions “the capabilities and constraints of information developed through various creation processes” (Association of College & Research Libraries, 2016, p. 14).

The Framework also describes the impact of one’s creative choices on a given information product (ACRL, 2016, p. 15).  The actors chose their selections thoughtfully.  As a case in point, the passage from Margaret Atwood’s The Handmaid’s Tale concerned how the dystopian rules (in the story) piled on gradually.  At first a rule was justified due to emergency.  Then it led to another rule.  Left unquestioned the rules slowly and insidiously got more restrictive.  The same could be said of censorship.

Thanks to Mount Prospect Public Library and City Lit Theater for a thought-provoking, yet entertaining program.  A few weeks have passed since the event.  Still, these issues are relevant at any time.

Get new USM ConnectEd content delivered to your inbox!